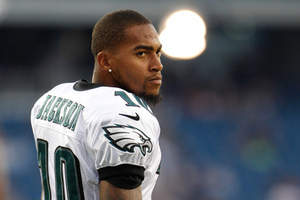 That “selfish, arrogant little punk” DeSean Jackson, who was named one of the “10 biggest jerks in the NFL” is at it again! A young man who has already donated his time and money to fighting bullying, fighting the cancer that claimed his father and helping make a wish children is now supporting our veterans.

Jackson will be at Ft. Dix & McGuire Air Force base today at 1pm to meet wounded US veterans and present a donation of $50,000 to the Wounded Warrior project.

“The Wounded Warrior Project is a great organization and this is something that I feel very grateful and blessed to be able to do,” said Jackson. “My cousin, Jimmy Jackson, was a Sergeant E5 and won two purple hearts and two bronze stars after serving in Vietnam. After seeing what he’s dealt with throughout his life, this is a cause that really hits home for me. The people in the military put their lives on the line for us every day. I think it’s important to recognize the great service they provide for this country, especially at this time of year. I’m excited to meet some of the soldiers and let them know how much I appreciate what they do. They are true heroes.”

I get that DeSean Jackson likes to dance after he catches touchdowns and some people don’t like that. But the truest reflection of this kid’s character is in stuff like this. I’m proud to have a guy like DeSean Jackson to root for. He isn’t a “jerk” as Mike Freeman of CBS thinks. He’s a role model and if the rest of the NFL followed his lead, we’d all be better off.

So next time your catch a TD, dance all you like DeSean. You’ve earned it.