DeSean Jackson, Tampa Bay Buccaneers wide receiver, broke Jerry’s Rice’s record for the most touchdown catches of 60 or more yards during Sunday’s game against the Cincinnati Bengals.  DeSean Jackson now has 24 career touchdowns of 60 or more yards, which is the most in NFL history.  Jackson was humbled when he received a congratulatory Tweet from Jerry Rice who he regards as the G.O.A.T. [Greatest of All Time] who shared his wisdom and knowledge about the game early in his Jackson’s career.

Buccaneers quarterback Jameis Winston hit DeSean Jackson in the second quarter before the veteran went untouched for the score to make the game 21-6. DeSean Jackson reached another career milestone in last week’s win over the Cleveland Browns when he became the 47th NFL player to reach 10,000 receiving yards.

During the post-game interviews, Jackson expressed his gratitude to the Tampa Buccaneers, the Glazer Family and his teammates for giving him the opportunity to achieve this major milestone in his career.  “I take pride in knowing that I achieved this goal in a Bucs‘ jersey for our team and the Buccaneer fans” stated Jackson.

Bucs offensive tackle Donovan Smith (76) listens to Ready4Work participants Tuesday at Abe Brown Ministries in Tampa, Fla. Bucs players talked with ex-offenders who are a part of the Ready4Work program, about bias and faith, among other topics. The event was a part of the Tampa Bay Buccaneers recent social justice initiatives. MONICA HERNDON | Times
##
TAMPA — Buccaneers players spent Tuesday morning at Abe Brown Ministries in Belmont Heights listening to stories of redemption. The second stop on the team’s player-driven Social Justice Initiative schedule saw players immersed in a classroom setting alongside those currently making the adjustment from incarceration to becoming productive members of the workforce.
They heard a testimonial from Khadijah Lee, who served time for a drug conviction but through the Ready4Work Hillsborough ex-offender support program at Abe Brown Ministries now works at the Hillsborough County public defender’s office. “I think just in general, it was everyone’s openness and candidness that stood out,” said Bucs offensive guard Ali Marpet, who is one the initiative’s player board. “It’s not easy to talk about your life story to complete strangers and the fact that everyone was able to do that was really a testament to who they are. It’s really powerful stuff.”The Buccaneers’ year-round Social Justice Initiative, which was launched last month, was created to focus on police relations, criminal justice reform, racial equality, workforce development and youth empowerment.

The program was born when players wanted to make a grassroots effort to address social injustice issues beyond the on-field kneeling during the national anthem. “These were things that were important to the players,” said Bucs co-owner and Tampa Bay Buccaneers Foundation president Darcie Glazer Kassewitz. “They are putting this together. They are leading this. Prisons, back-to-work, empowerment for people, this is something they are very interested in. … That’s the beautiful thing about this program. It’s player-led, so it’s whatever touches their passion individually. That’s why it’s going to be so true and authentic, and why it’s going to be so amazing.”The program’s first event took players to Tampa Police Department’s Citizens Academy, where they reenacted scenarios in which officers must make life-changing decisions quickly.

Tuesday’s visit took them to a much different side to the spectrum, listening to those who have served time in jail and now are trying to overcome the stigma being labeled as criminals. Through the Ready4Work program, clients go through a four-to-six week, five-time a week career development crash course, the first step of helping them get jobs and reunite with their families. The program began locally four years ago, and of the 800 clients, 500 have completed the career development program, said Abe Brown Ministries president and Ready4Work director Robert Blount. It can be a challenge to getting clients jobs. Candidates have a 70 percent placement rate ad a 70 percent retention rate of being on the job 90 days of longer, Blount said. Blount said having the Bucs players —seven players attended the event, including Social Justice player board members Ali Marpet and Donovan Smith —visit a class offered “mutual exposure.” 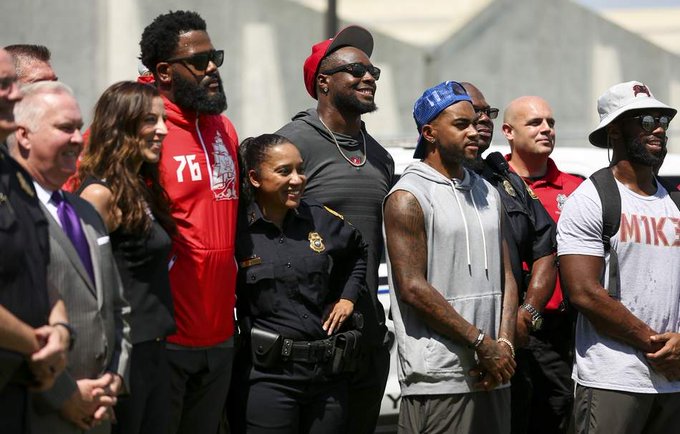 The player-led, year-round Tampa Bay Buccaneers Social Justice Initiative — created with $1 million in matching funds from the Glazer family — has adopted the motto, “We are the change.” #Bucs #Buccaneers @Buccaneers @TB_Times @NFLSTROUD http://www.tampabay.com/blogs/bucs/2018/09/18/bucs-announce-social-justice-initiative/ …

“I think it puts a face on it for them,” Blount said. “It goes beyond an Orange County jail uniform or a state prison blue suit. It goes beyond a DOC number. These are mothers, these are fathers. They’re real people like you and I, so I think it helps them to kind of put it in perspective, yeah you hear this label, but these are real people like you and I.“They’re more than just a label. From an athlete’s standpoint, I’m sure some of them have been labeled. Yeah, he’s just a dumb jock. So having to endure and overcome those labels, knowing that just because you have that label, you don’t have to accept it.”

Smith sat next to Kingson Aristil, who served 10 years in jail. Aristil, who ran track, cross country and played baseball at an Orlando high school, was incarcerated when he was 18. He is in his fourth week of the Ready4Work program, and looks forward to owning his own business one day.“For the first five years of my incarceration, I beat myself up about seeing guys I went to school with make it pro,” Aristil said. “A little bit of jealousy and envy went through me because I felt like I needed to be them. … Right now, in my life, I’m getting to a point of contentment. I’m happy seeing guys who are younger than me in the NFL doing what they need to do and coming back and giving back. I was broken. I was hurt. I thought I would never be able to compensate for the 10 years that I lost. My spirit feels at peace here. I feel humble here. I feel love.”

“Football and life parallels in a lot of ways,” the Bucs’ Donovan Smith said. “It’s about second chances. Every day, we’re given the chance to be our best. Unfortunately, in society, poorly-made decisions in people’s lives can kind of negate those chance. To come to a place where they are able to be in the path on their way back to normal society, it’s huge. We wanted to make it a point to be there and understand and sit down and talk with the people who are going through these things and hit it all. “Everybody goes through things,” he added, “Just hearing their stories and their similarities, it’s was lack of a better word, weird, because we are on two different ends to the spectrum, but we have similar backgrounds. It was just great to get here and hear the testimonies and just sit down one-on-one with them.