NEW YORK — Gene Upshaw, the Hall of Fame guard who during a quarter century as union head helped get NFL players free agency and the riches that came with it, has died. He was 63. 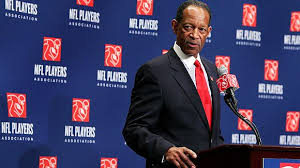 Upshaw died Wednesday night at his home near California’s Lake Tahoe of pancreatic cancer, which was diagnosed only last Sunday, the NFL Players Association said Thursday. His wife, Terri, and sons Eugene Jr., Justin and Daniel were by his side.

Upshaw had not been feeling well for about a week; his wife noticed his breathing had become somewhat labored, sources told ESPN’s Chris Mortensen. She convinced her husband to go to the emergency room Sunday, and it was then that he received a cancer diagnosis.

Dr. Thom Mayer, the medical director for the NFLPA, told Mortensen that after Upshaw’s wife had called him Saturday, it took the two a day to convince him to get to a hospital.